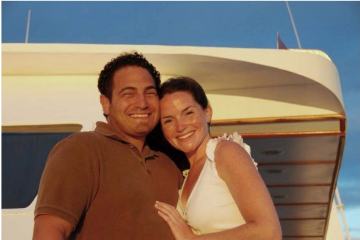 When Amy Stein and Eli Nussbaum, both of Chicago, became engaged, one of the things they decided on was not to have the conventional type of bridal shower where the guests bring giftsfor the soon-to-be-married couple.

Instead Amy and Eli chose five charities that had special meaning to them and requested that all their friends and family make contributions to these worthwhile organizations in their honor instead of giving gifts.

One of the organizations they chose was the North American Conference on Ethiopian Jewry(NACOEJ), a grassroots, non-profit, humanitarian group dedicated solely to assisting Ethiopian Jews in Ethiopia and Israel.

Amy explained their reason for this particular choice. After college she went into the Peace Corps. She spent two years in Namibia in Africa and fell in love with the people, especially the children. By choosing NACOEJ, she and Eli were combining her love of the people of Africa with an organization that assisted Jews who came from this region of the world.

Amy is a music teacher at Northwood Junior High in Highland Park. It is a custom in this school for the teachers and students to give a gift to a teacher who is getting married. One of Amy’s friends told the committee at the school about the fact that she and Eli didn’t want gifts and gave the committee chair a list of the five charitable organizations the young couple had selected.

One of the reasons the teachers chose this project was because it would be a children to children project. The kids in their school could relate completely to collecting these supplies for the children in Israel and, at the same time, they would learn about these children. As well, because Amy is a teacher, the connection was a very logical one.

For two weeks the children brought in school supplies to their homerooms every morning. There are over 400 students in the school and by the time they finished they had collected five duffel bags full of new school supplies. As of this writing, two of those bags have already been carried to Israel by Amy and Eli’s family members and the other three will go as soon as there is someone to take them.

Purely coincidentally, Amy’s new parents-in-law, Bobbie and Jerry Nussbaum, also of Chicago, are long-time NACOEJ supporters. Their home in West Rogers Park proudly displays many hand-made, embroidered pillow covers made by Jews in Ethiopia as they awaited their turn to make aliyah.

Amy and Eli turned their simcha into an opportunity for family and friends to participate in the mitzvah of tzedakah. As well, they enabled a whole school of Chicago children to learn about Ethiopian-Israeli children on the other side of the world. Truly a win/win/win situation.